“If you do not have a church home in Big Valley, we welcome you to worship with us.”
Sundays at 10:30 AM

Behold how good and how pleasant it is for people to dwell together in unity!

Reverend Barbara Lieurance welcomes newcomers to the congregation Sunday’s at 11:00 AM at the Drop-in Centre.

May your gift of self be a blessing to many.

Sitting on the hills overlooking the Village, our landmark blue 1916 Anglican church is a provincial heritage site.

In late 1914, the Anglican Diocese of Calgary received a letter and the sum of $500.00 from Mrs. Caroline Leffler, an English lady, who raised the money by making and selling children’s clothing. The letter indicated her wish that the money be used to establish a Church of England anywhere in western Canada that the Diocese saw fit.

By 1915, Big Valley was booming. It was a well established ranching community, an important divisional point on the Canadian Northern Railway and a prosperous coal mining center. The community’s population seemed certain to exceed the 2,000 mark. The Diocese soon decided that Big Valley was the logical choice for the new church. They chose a site on top of the valley edge overlooking Main Street and contacted a local craftsman, Mr. Walter Dennis, to build it.

The church, named St. Edmund’s, was virtually completed by the end of 1916 and the first church service was held in the nearly-finished building on November of that year. For the first six years, the entry doorway was on the west side. Strong, prevailing north-west winds were a problem, so the present bell tower was added in 1923 to provide an east-facing doorway. The exterior finish, which had originally been stucco, was changed to siding at that time and painted the traditional cream color.

After many years of serving the community, the church gradually saw less and less use. The last regular service was held in the 1960’s. The building soon began to show signs of neglect. A community Homecoming was organized for 1974 and the conspicuous but shabby church was in need of paint. The organizers had no money, but the local lumber yard offered a large quantity of blue paint that they had “been stuck with”. The offer was eagerly accepted and the church became blue! The furor of the local Anglicans was something else indeed, but the unusual blue color has been gradually accepted and is now a trademark of the town.

In 1997, the quaintness of the Blue Church was further enhanced by the addition of an automatic bell ringing device donated by Harry Stuber and designed by his son, Lionel. The huge bell now rings out the hour, much like a grandfather clock. It’s rather like the “Big Ben of Big Valley.”

Each year, many couples choose the beautiful old church as a unique setting for their wedding. 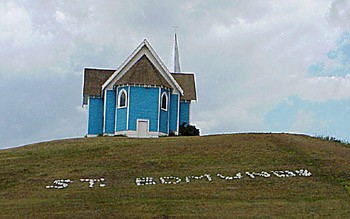 Inside view of St. Edmunds